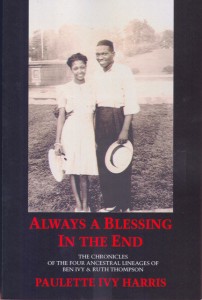 From Bangles to Shackles

The tribal nations of Africa were composed of vibrant and creative peoples filled with reverence for their ancestors, warriors, and culture, which they expressed in their art. They demonstrated this when they adorned their bodies with jewelry and colorfully decorated their skin, garments, and utensils.  They used shells, flowers, and dyes from the plants that nature provided them.

Africans believed in their personal and spiritual relationship with nature, with ancestral and animal spirits, and also with the God they revered.  Africans were no strangers to monotheism, as some had religious roots in Judaism.  Their diverse cultures celebrated the connections between themselves and their God.  They also celebrated and honored their warriors who for thousands of years conquered and defended territories.  Tribes among the many African nations also peacefully traded and bartered with one another, locally and regionally, for their mutual benefits.

African societies had class hierarchies that distinguished the royalty class from their spiritual leaders, and the warrior class from the remainder of its citizens.  The elder class was highly respected; and men, women, and children had their own prescribed places in their culture.  Thus, their cultures were organized to suit them.

The exposure of European white men to Africans was gradual and unthreatening at first.  European nations expanded into the African continent in search of new natural resources, and for exotic animals and their pelts to use for their amusement.  White hunters used Africans as scouts and also to help them to communicate with other tribesmen when trading and bartering for land and resources.

Meanwhile, the push to discover a new trade route to China was being waged on the Atlantic Ocean by Spain and France.  In 1492 Spain dropped anchor first, not in China, but on a land not previously known to Europeans.  What they called the New World became known as South America, the West Indies, and North America.

Initially, Africans came to the New World like everyone else did.  There is evidence that centuries before Europeans even, Africans sailed across the Atlantic to the South American Continent and the West Indies on their own.  When Europeans started venturing to the New World, Africans accompanied them as explorers, skilled navigators, seamen, craftsmen, barterers, herbalists, and planters.

The idea of importing West Africans to colonies in the West Indies to be used as slaves instead of the native peoples there was made a reality in the early 1500’s.  This was because the native peoples were quickly dying due to their lack of immunity to European diseases.  After decades of their traversing West Africa, Europeans no longer had that problem with Africans.  Also, since there was a tribal practice of using prisoners of war for forced labor, it was not a far leap for African tribal nations to barter off their captives to white slavers.  African conquerors had not realized they had opened a three hundred year portal for African procurers to profit by the full scale indiscriminant capture of their own general population for white importers whose trade was the selling of slaves.

Slave trading was a highly competitive, but profitable business by the middle of the 1500’s.  Most readers of black history have seen the illustrations of how Africans were shackled together and stretched prostrate on rows atop of rows below the decks of slaver ships.  Most have read about how Africans endured the cargo holds which progressively and quickly degraded upon them during their trip across the Atlantic.  The slave trade routes ran from the Dutch, French, and Spanish colonies of West Africa and across the Atlantic to the West Indies for the next sixty or seventy years.

During the early colonization (prior to 1619) of North America by England, African and European immigrants were allowed to travel on cargo ships in exchange for their indentured services for a specific period of time as payment for their passage.  After arriving, African and white immigrants fulfilled their indentured servant contracts, usually seven years, were released, and then got on with the business of farming their own crops and eking out livelihoods for their own families.  However, the exporting of goods from the North American continent to Europe increased yearly for the American colonies.  This success increased the need for manual labor. The planter’s dilemma concerning indentured servants was that workers needed to be constantly replenished.  Planters began relying on the slave labor imported from the West Indies, but the number of available slaves was dwindling because importation was being restricted by the West Indies colonies.  Labor demands began to surpass that which immigrant indentured servants could provide.

The increasing demand for more and more production of tobacco, indigo, and sugar cane; later rice, and lastly cotton, fueled the planters’ zeal to earn more and more profits from their pastures.  Likewise, more acreage was added to farms which grew into plantations that had their own processing operations on the premises.

Larger plantations meant more manual labor was needed.  Because of their lack of immunity to European diseases, Native Americans easily died and their knowledge of the land made it easy for them to escape and impossible to recapture.  Thus, they were considered unsuitable for bondage.

There had always been slaves in the early American colonies.  However, the first purchase of slaves directly from Africa, which conjured up the idea of trading slaves, began in 1619 when a Dutch slave ship traded for food twenty Africans from a cargo ship headed to the English colony of Jamestown, Virginia.  Jamestown was the first permanent colonial settlement in America.  Historical accounts are that these Africans were not slaves, but indentured servants.  Whether they were indentured servants or ended up as slaves, the seed for the subsequent bloom of the slaving business in the colonies was sowed.

Slavery in America took over fifty years to gain momentum.  The Massachusetts colonies enacted the Body of Liberties with the intention of diminishing slavery except under “certain circumstances” which included persons who were prisoners of war and the voluntary sale of one’s self.[i] Other colonies adopted similar statutes but so expanded the instances where enslavement was lawful that the proscriptions against slavery became meaningless.  In about 1664 the Maryland colonies were the first to solidify the practice of slavery by extending the servitude of African servants for longer and still longer periods of time while simultaneously eroding servant rights until my ancestors became servants for life without rights.  To be a slave in America meant that you did not own anything, not your labor, neither your body, nor the children you produced.  The business of slave owning also meant having to retrieve runaways, and by 1700 most colonies would have laws to deal with fugitive slaves.  The laws would absolve a slave hunter if a slave was killed while he was resisting capture.  Virginia would adopt a law that said it was not a crime to kill a slave.[ii]

By 1671 white indentured servants were still the overwhelming majority of the farm laboring population.[iii] However, indentured servitude quickly gave way to involuntary servitude as American planters demanded more slaves.  The importation of slaves direct from West Africa to the northern colonies became the norm and the Brittan vessels held a monopoly over slave importation.  After protests were raised about the British monopoly, the free trading and marketing of slaves was opened in 1698 and all who could afford cargo vessels entered the trade.

To Europeans, Africans appeared to be without the protection of an official state entity because the populations lived separately in small villages.  With no organized national military to protect them, whole African villages were fair game for slavers.

Proponents of slavery justified their owning of slaves by accepting the theory that Africans were inferior, even subhuman, to whites and that their blackness was evidence that nature destined them for servitude.  Pro-slavery theologians were busy scouring the Word of God for Scripture that supported their theories for enslaving my African ancestors; and many Gospel ministers even held slaves.  Then, the slaveholders tried teaching my ancestors that they had been ordained to slavery by God and through faithful and obedient service they would reap the rewards of heaven.  The Quakers of Pennsylvania began their protests against slavery as early as 1688.[iv] Others expressed their resistance to slavery privately in their own ways, while still others openly protested slavery because they found it difficult to compete economically with others who used slave labor.  Not many groups opposed slavery for the immorality of it, except for the Quakers.  In 1780 Pennsylvania, having a history of opposing slavery, passed the first statutes calling for the gradual emancipation of children descended from current slaves when they reached the age of twenty-eight.[v]

Back To Previous Book