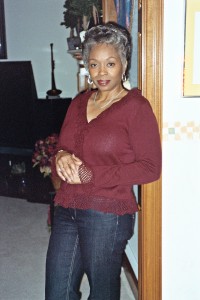 Paulette Ivy Harris was born in St. Louis, Missouri to a strong, dutiful father and a stunningly beautiful mother. She grew up in a west suburb of that city, the sixth of ten children, and was raised Catholic. Her father was a laborer for the Catholic Archdiocese and worked part-time cleaning offices and catering parties on weekends to make extra income for his family. Her mother worked the night shift as a physician’s assistant at a local medical center, and later as a U.S. Government records employee.

Harris had an excellent public school education. She was a member of her high school symphonic choir and loved intramural sports. However, her favorite activity outside of school was competitive marching as a member of a drum & bugle corps. In this organization, she excelled to the position of guard captain in charge of creating and teaching flag work and marching routines to be performed in competitions and parades.

After high school, Harris entered Kendall College of Evanston, Illinois, and earned an Associate Arts degree. By this time, she had met the love of her life and future husband. Two years later, she graduated from Loyola University of Chicago with a Bachelor of Science degree in Psychology.

Instead of continuing with graduate study in clinical psychology, she began her employment career with an insurance company in Chicago as a claim adjuster, and later as a group benefits underwriter. Three years after graduating college, her father passed away from cancer. Later that same year Harris married.

After six years of marriage, a son was born. The Harrises had a typical settled life until their son was five. Then the Harrises were on the move. Her husband’s retail career demanded that her family relocate to Peoria, Illinois. During their six-year stay in Peoria, Harris was a stay-at-home-mom to their grade-school-age son, while her husband was on the road and home only on the weekends. Although her parenting responsibilities doubled, she taught herself to paint with watercolor out of necessity for art to decorate the walls of their home. Her developing art skills translated to the creation of a beautifully landscaped property. Harris’ love of decorating was awakened, so she trained as an independent decorator with a network marketer of home furnishings.

When her grandmother passed three years after Harris married, she realized that she had lost the opportunity to ask her grandmother about earlier generations. Family history was a topic that had interested her since the movie ROOTS was aired on television in the 1970s. She finally made the commitment to start a search for her ancestry, as a hobby. The search hooked her right away.

In the early search for her roots, Harris queried various historical societies for records, sought vital records from states, and made frequent travels home to visit the St. Louis Library’s huge cache of microfiche of genealogical records. Her mother was an important source for family names, lore and oral tradition which gave her clues about locales to search.

Harris remained devoted to her genealogy hobby despite several more relocations due to her husband’s progressing career. Over the span of eighteen months, the Harrises moved from Peoria to Naperville, Illinois, then to South Bend, Indiana, and on to the Avon community, west of Indianapolis. Their son began his high school years in their new community. After graduation, he entered culinary school and earned a degree in culinary arts.

Harris' first computer helped make monumental strides in discoveries about her ancestors during the last three years of her research. Through the internet, she could search town or state records and not have to write letters or travel there.

After a total of fourteen years of searching, she organized the information she collected in a 147-page spiral-bound outline of facts and dates. Her mother and siblings were thrilled by the extent of the tome, but Harris was dissatisfied with that first volume. She realized that she knew much more about her ancestors and how they coped throughout the history of the United States. However, the research needed to be presented in interesting prose. It was then that Harris decided to rewrite her family history as a nonfiction narrative. Her writing career had begun. The new project developed into a significant treatise, but continued to be a labor of love. She titled her first book ALWAYS A BLESSING IN THE END and published it in 2005. She wrote it not only for her family, but also for other genealogy enthusiasts to use as a reference for finding historical sources and writing about their own ancestral roots.

Meanwhile, Harris was fascinated by the fortitude of her female ancestors. In a particular ancestor, she saw a wonderful story in which to write about African American history and culture, as well as about  love, personal loss, triumph, and the societal struggles of a sample of black citizens in early twentieth-century America. Inspired by her beloved ancestor, in 2012 Harris penned her second book as historical fiction called, BENEATH EVERY TROUBLIN’ STONE.

Harris' interest expanded to young readers which led her to publish her first book for children called, RUMA, WARRIOR PRINCESS in 2012. A year later in 2013, she wrote, illustrated in watercolors, and published IS THIS ALL I TRULY AM? for children.

Meanwhile, so many story ideas filled her head that she decided that short story would be the most expedient way to bring her plots and themes to the public. For 2019, Harris is proud to present her first collection of page-turning short stories for adult readers titled, UNEARTHED TALES OF DESTINED SOULS: STORIES FOR PONDERING MORTALS VOLUME 1, in multiple genres including fantasy, romance, Scripture-inspired, contemporary and historical.

Harris resides in Indiana with her loving husband, Spencer Harris, of more than forty-two years. Her adult son lives near by. Her mother is now a beautiful 97 years young and still an inspiration to her.

Back to About Author